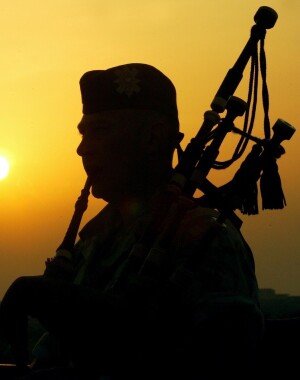 Rick grew up in Highland, Indiana and graduated from Highland Senior High School in June 1976.  Within a week of graduation, Rick entered the U.S. Army for basic training at Fort Knox, Kentucky.  He served in the 2nd Armored Division at Fort Hood, Texas from October 1976 until June 1980.  After being honorably discharged from the military, Rick began a 25+ year career with the Lake County (Indiana) Police Department and retired as a Lieutenant in charge of the Department’s Aviation Division.  During his time on the Department, Rick served as a Patrol Officer, Accident Investigator/Vehicle Accident Reconstructionist, Supervisor in Traffic Division, before being transferred to the Department of Aviation.  Rick served as one of three pilots assigned to the division.  Through additional training Rick became a commercial rated Helicopter Pilot, Commercial Single Engine Airplane Pilot and Commercial Multi-Engine Airplane Pilot.

When you hear bagpipes, think of Rick.  Why? Rick was an original founding piper with the Lake County Pipes & Drums, the Sheriff’s Department Pipe Band.  Rick decided that for his 40th birthday, he wanted to learn the pipes, that way at age 60 he couldn’t say “I wish I had.”  But could rather say I have 20 years’ experience playing the bagpipes.

After retirement, Rick took a position as a Commercial Helicopter Pilot with Sun Aero Helicopters, which took him all over the country, providing charter helicopter services for NASCAR throughout most of the year.  When the economy started to recess, Rick worked part-time until relocating to Florida.  For several years, Rick worked part-time in various Golf Pro Shops in Florida and enjoyed playing golf.

A Visitation for family and friends will be held from 9:30-10:30am, Thursday, July 2, 2020 at Christ Lutheran Church, where Funeral Services will begin at 10:30am, with Pastor Paul Meseke officiating.  Funeral Services may also be viewed online at www.clcfla.org.

In lieu of flowers, memorial contributions may be made to Christ Lutheran Church or a charity of your choice.

To send flowers to the family or plant a tree in memory of Richard S. Bruner, please visit our floral store.